The “KdF Sea Bath for 20.000”
The east coast of Rügen with its white beaches and old pine forests underwent change during the 30’s of the last century. The NS community “Strength through Joy” constructed a 4.7 km long building strip, consisting of 8 blocks each with a length of 500m; The “KdF Sea Bath Rügen”.
“Strength through Joy” was a sub organization of the “German Labor Front” whose main objective was the extensive organization of leisure time for the Germans, especially the layout of holidays.
The leader of the “German Labor Front”, Robert Ley, has consistently stated that Hitler himself has had the idea of building five “KdF Sea Baths”. However, it is only in Prora where this has been realized. In the beginning of 1936 a competition was held in which 11 architects participated. There were clear building regulations: all rooms must point towards the sea. A festival hall is meant to hold up to 20,000 people. Hitler himself supposedly chose the design by the Cologne architect, Clemens Klotz. The central festival hall is meant to be constructed according to the plans of Erich zu Putlitz.
Modell der Anlage, 1936

Architecural perspective after the drawings of Clemens Klotz

The laying of the foundation stone took place on the 2nd of May 1936, the third anniversary of the “Storming of the Unions” in which the trade unions were destroyed. It was a mass spectacle that was broadcasted via radio. The Navy and Air Force participated. Robert Ley held the main speech.

The laborers began their construction of the foundation during April 1938. In the summer of 1939, the so called accommodation houses that are parallel to the beach and the skeletal construction in the centre were completed. Construction was halted with the beginning of the war in 1939, seeing as the construction companies were needed in building facilities necessary for the war.

1940 to 1942 six police bataillons received military training, prior to being sent to the Eastern Front. From 1942 till the end of the war, young men and women were trained as Intelligence Assistants of the Navy and were stationed at a sick bay. This usage of the compound was already planned and anticipated during the architectural competition.

By the end of the war, Prora was used as a refugee camp. At the end of 1945, Soviet troops made use of the accommodation facility. After this, Prora was used by the National People’s Army of the German Democratic Republic. Until 1991 the compound of the former “KdF Sea Bath” would remain a restricted military zone. The “NVA” would hand it over to the Federal Defense Force, which it would in turn evacuate by the end of 1991.
Prora post 1989
After the Bundeswehr would leave the property in 1991, the compound would become property the Federal Republic of Germany. Ever since its evacuation, the revenue authorities have tried to market Prora in a commercial manner.
Prora was put under monumental protection in 1994. The justification for monumental protection: “The architectural assemble Prora… was meant to be the biggest Sea Bath in the world… The skeletal reinforced concrete structure emphasizes the technical abilities of the 1930’s and is therefore an important testimony of the relationship between labor and production during its time of origin…”
The central and most preserved section (Blocks 1,2,3 and 4) in which the Documentation Centre Prora is situated (Block 3, sidewing) was sold to private investors in 2004, who install hotels, holiday homes, wellness centers and sport facilities. Construction started in 2012, 2014 the first people moved into their apartments. Block 1, 2 and 4 are completly renovated, block 3 amost (as of early 2022).
Block 5 belongs to the county of Rügen. A youth hostel was opened in 2011 next to the already existing campgrounds for young people. 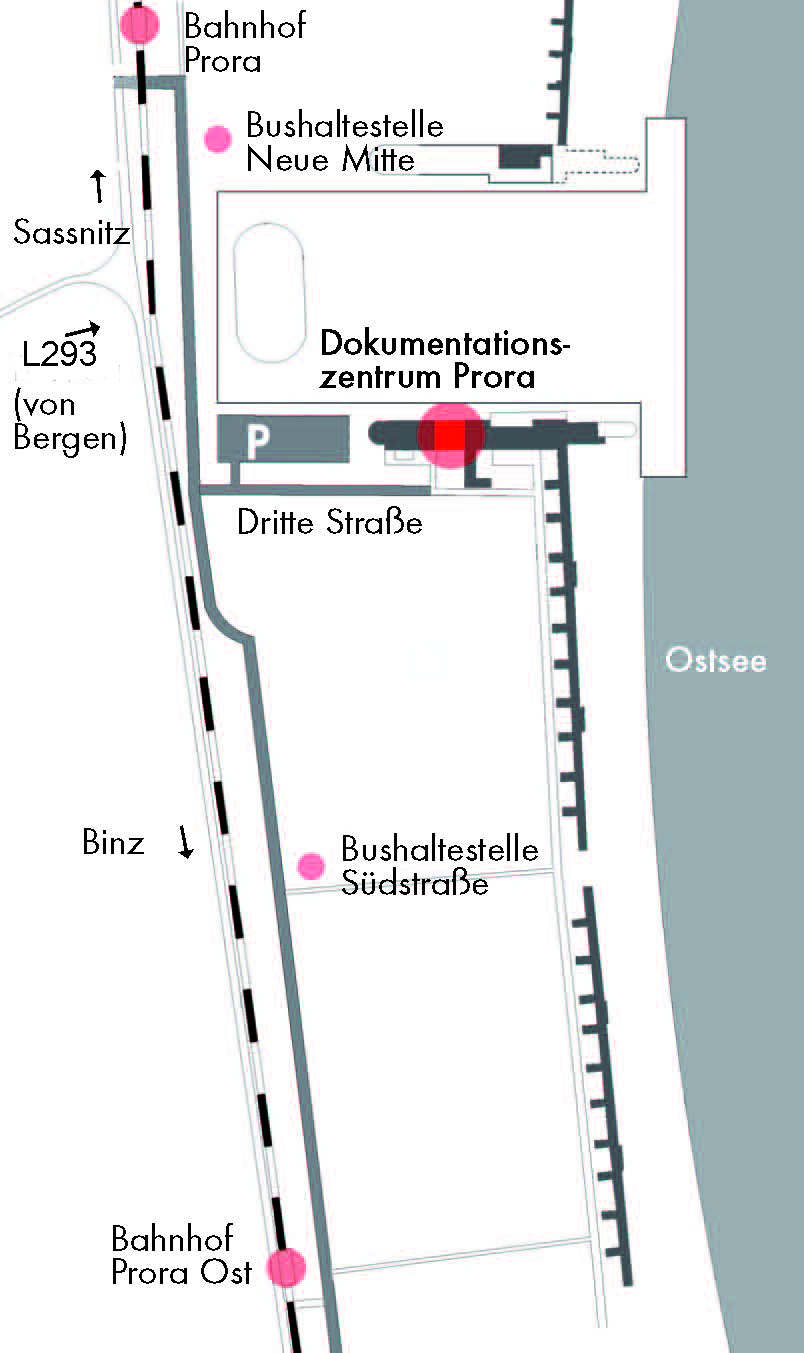